I interviewed Resistant Culture for the 2nd annual Pyrate Punx 'zine. I am really happy with how it turned out. It is a pretty short interview, but, I think they gave me some amazing answers. I hope you enjoy reading it as much as I enjoyed putting it together. The physical copy of the 'zine should be out sometime this month. 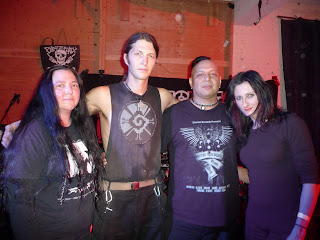 1.  Having been around in one form or another since the late 80's, you have seen the L.A. Punk/Grind/Crust/Anarcho scene and culture grow and change over the years. How would you describe the current situation in your city and other cities and what role do you see Resistant Culture playing in this ever-evolving community?


The LA scene has changed a lot. It used to be dominated by constant violence, over the years it's mellowed out a lot which is a good thing. Also, the scene has become more intelligent over time and the raw angst of the music has found meaningful channels and outlets in real social movements.   The current situation in L.A.is hard to describe because it's so big and diverse. There are subgenres and scenes that exist on all levels of consciousness. You can find totally nihilistic apathetic scenesters and you can find front-line activists. RC's role, we hope, is to be a positive empowering soundtrack for personal revolution. We don't take sides in ideological disputes, nor do we claim to represent any movement. No matter what your struggles are or what your beliefs are, RC tries to provide sonic medicine for all who resist oppression of any kind.


2.  It seems like the band tours rather regularly. How often would you say you are on the road throughout any given year, and does touring conflict with the members activities outside of the band?


We tour much of the U.S. about once a year and do mini tours whenever possible of the East and West coast. We've configured our lives to be flexible so that we can tour whenever we want or when an opportunity arises.


A lot of our lyrics focus on the destruction of nature and the oppression of people and animals. We also focus on raising consciousness about the past, present, and future of traditional indigenous peoples worldwide. We believe that we need to deepen our understanding of the state of world and the state of our minds since we are heading toward an uncertain future.  Creating a dialog through music for people to discuss new ideas for change and new possibilities for community empowerment is the substance we try to bring to the music world.


4.  What does the band think of the "Occupy Movement"? Could or should the organizers and/or protesters have done anything differently? Do you believe these actions have worked on any level?


We don't have any criticism of the movement. It's too diverse and complex to really judge anyone. It's healthy that there are no formal leaders and that everyone's voice is validated. The movement has worked in that it's brought the concerns of the people to the mainstream media, and thus has been able to connect with millions of people who may have felt alone in their struggles. It's building much needed unity and solidarity across diverse sectors of society.


5.  Any offers to play larger festivals like Maryland Death Fest? Would playing said festivals conflict with the band ideology considering most festivals of that magnitude are sponsored by giant beer conglomerates or other mega corps.?


No offers at this time. We'd be willing to play in most cases and feel solid in the following logic: if only the bands with no message play for the bigger crowds, the consciousness of the crowds will never grow beyond whatever hollow fashion is en vogue, but if bands with messages share them, there's a positive impact that otherwise wouldn't take place. There's hypocrisy in touring on fossil fuels, putting out petroleum based vinyl records, using electricity to run amps. Every barcode is a compromise, we feel lucky to have the opportunity to share our music and art with anyone who will listen and support us on our journey. We don't have a dogmatic rule-book that we follow at this time. Not every show we are invited to play necessarily represents our values, however when we organize events of our own we have more control and we create an environment that is aligned with our values as much as possible. As far as the sponsorship by giant beer conglomerates or other mega corps, it's probably safe to say that almost every punk show of all time has been an advertisement for big beer companies. Of all movements, the punk movement is one of the most proud consumers of corporate macro-brew. It will be great when every punk show is lit up by home-brew made from home-grown ingredients, and when partying to just "pass the time" shifts and transforms into the celebration of the fruits of collective labor to design and build sustainable communities. Imagine punk houses and venues covered in berry vines, surrounded by food forest gardens spanning acres with fermentable fruit orchards, corn guilds, agave plants, culinary and medicinal herbs, and more. This evolution in the cultural ecology of the punk movement won't happen overnight, but it's a dream to move towards one day at a time. If any movement can do it, the punk movement can. It has the D.I.Y. ethics, tight-knit communities, and commonality of vision.


7.  Speaking of activities outside of the band, what does each member do for a living, and do any of your jobs conflict with the band ideology?


We work as independent contractors in various fields. We don't always have control over what our clients think and do, but we all do non-profit/charity/volunteer work in our spare time and donate what we can (including a portion of mp3 sales of our albums) to our favorite causes. Again, we don't have a totalizing ideology, even within the band we're all different, though we have a common vision and our individual perspectives can be honored for their diversity and synergy.


8.  Considering the band works as a collective, what movie would you say best encapsulates the beliefs of the band and why?


Dreamkeeper! It's a modern film about Native American traditional stories. It depicts the struggle to live by the ways of Earth, a struggle that sooner or later all of humanity will have to face.


We encourage folks to start learning to grow food, find local sources of fresh clean water, and develop personal and family disaster preparedness strategies that include emergency kits, food and water storage, and plans for sheltering in place and evacuation. There’s a lot we can do to be prepared for small to large scale, short to long duration disruption in the systems of support that we are unfortunately completely dependent on for survival in modern industrial society. The collapse is happening rapidly and the time to prepare is now. We don't believe in an "end of the world" doomsday, it's just undeniable at this point that artificial stability is an illusion and the resources we take for granted today may be in short supply or gone tomorrow. Most importantly, we encourage people to be their own leaders, follow their own paths, think for themselves, make their own choices, and question everything.