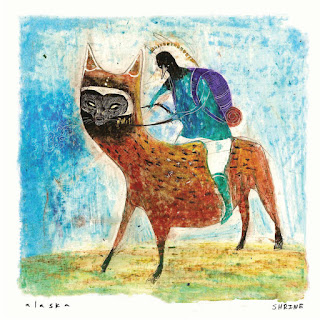 When I think of the sprawling wasteland that is the Las Vegas valley, I rarely think of anything other than shattered hopes, dreams lost at the blackjack table and another early morning spent squandering your kid's college fund just to pay back your bookie. Sure, I may be speaking from experience, but that's beside the point. It's not often I encounter a band from that area who can make me feel the sort of joy, lightness and elation a really good Durban Poison joint makes me feel. I've found that in Alaska. Never before has there been a more befitting moniker.
This wonderful band of lovable goofballs have crafted a record filled to the brim with so many posi anthems it's almost impossible not to grin like a bastard the whole time you are listening to this. I mean, doesn't everyone need a little chill in their desert heat? This record has it all. A bit of twinkle and math, some truly beautiful indie rock flourishes and those completely necessary and totally well-formed buildups that every great post-hardcore band should know how to incorporate into their songs to make them more than merely mediocre. The vocals are strong and confident from the sung to the screamed and do so much more than just merely float along with the music. They act as another instrument entirely while complimenting the structure and adding another layer to the already swelling soundscape. Alaska has perfected the formula and effortlessly turned that shit on its ear. This is one of the most exciting records I've heard this year and one of my favorite releases of the last few.
These aren't merely punk songs or emo songs or post-whatever songs. These are modern psychedelic masterpieces written with a flare for the dramatic and a true sense of urgency and dynamics. With lyrics that are vague & opaque enough to make even the most grizzled beat poet proud, I imagine this is what Syd Barrett would be writing were he a 20-something emo kid living in Nevada.
On a side note, the gentlemen who make up this wonderful ensemble are some of the nicest, kindest, most respectable house guests a show promoter could ask for. So, that may make my love for them a bit biased. Either way, you would be a fool to sleep on this record.
If you need a comparison, how about mewithoutYou jamming with Foxing while Manchester Orchestra takes bong rips behind the mixing board. Or not. Just listen, make up your own mind and form your own opinion.
Posted by JonfromWisconsin at 5:00 PM