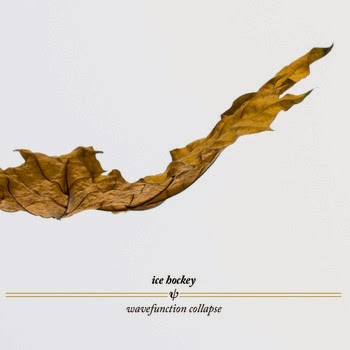 Ice Hockey is family. Ice Hockey are my brothers. Ice Hockey were born on the mean streets of the Quad Cities, which is a cluster of towns in Iowa and Illinois situated along the Mississippi River. I was born there, too. As a young man doing everything in his power to get out of the Midwest, I never would have thought a band of this magnitude could come from a place like that. Little did I know that I would end up regretting that belief someday.
'Wavefunction Collapse' is their newest offering, and with it you will find some of the most chaotic, bombastic hardcore this side of Combatwoundedveteran and Reversal Of Man. Now, don't take that to mean these guys are some sort of fly-by-night copycat outfit. That couldn't be further from the truth. Ice Hockey are blazing their own trails and tearing down any preconceived ideas about what a screamo record is supposed to sound like. This isn't all blast for blast's sake, shirt collar tugging, fall on the floor for effect samecore. These songs take on lives of their own because everyone in this band is a master of their craft. There are fun, noodly parts that bounce along until the breakdown drops and crushes it all. There are odd, experimental/psyche parts that let you know these guys have listened to their fare share of Yes & King Crimson records. There are unrestrained bursts of pure, unadulterated rage that should make you scared for your own safety. There is a snarling, smiling beast with a microphone doing somersaults and cartwheels through the crowd. All of these elements come together flawlessly to create a final draft that is haunting, hopeful and damaged at the same time.
I could go finish this review with a RIYL list and all that... It's not worth it. You already know if you want this band in your life. I can't change your mind. The one thing I know for certain and the truth to end all truths is this: I am so happy to have these fellas in my life and I am 100% convinced that they are one of the best punk bands in the world right now.
Posted by JonfromWisconsin at 7:29 PM