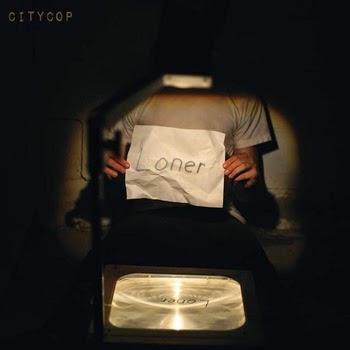 'Loner' by Citycop is yet another favorite from 2014 which I haven't really had much chance to laud yet. Long before the record came out, I was at their house in Akron for a much needed visit when I got the chance to hear some early recordings of the songs. I knew then and there that it was going to be very special. I couldn't have been more right. This newest record has taken them to a plateau few bands will ever reach in their career.
The men in Citycop and I have been friends for quite awhile now, and I have been able to watch them grow and develop into the genre-destroying juggernaut they have become. When people ask me, I never have an easy time describing what they sound like. Calling them hardcore is selling them short. Calling them screamo is selling them short. Calling them emo is definitely selling them short. It's tough to classify a band who defy classification. Maybe if they were just your run-of-the-mill hardcore act, it would be a little easier to pigeonhole them... Maybe if they weren't so meticulous about making sure every note felt like it could be their last it would be easier to put them in a neat little box.
One of the main things that set them apart, aside from the fact that each member of the band is a verifiable expert at their chosen instrument is Max's acoustic guitar. Now, there have been a couple screamo bands over the years to incorporate an amplified acoustic into their music, but none have been able to pull it off with the level of success and confidence that Citycop has. Max is certainly not your typical guitar player. He bleeds the notes out while incorporating everything from classical to jazz to middle eastern rhythms into his playing. His abilities are unparalleled. Todd is no different on the bass. He is like a spastic child possessed when he is on stage. Running, jumping, whirling and flailing all over like his very life depends on it. Eddie is definitely one of the most impassioned vocalists you will ever have the chance to watch. He feels the words like few others. And, Cody... The only thing I can say about Cody is that he is, without a doubt the best drummer out there, period. He is the modern, living embodiment of Gene Krupa. Bashing, smashing and destroying anything and everything you think you know about syncopation and beat. Alright, enough fawning over my boys, for now.
It's nearly impossible to compare Citycop to other bands. They definitely stand alone. I will say, if you enjoy non-traditional post-hardcore and you are yearning for something new and completely out of left field, you would be smart to give this band a listen. If you have ever enjoyed the sounds of Thoughts Paint The Sky, With Horses In Her Eyes, Frank Zappa, Ginger Baker, The Mahavishnu Orchestra, American Football, Karate, Miles Davis and/or The Chicago Art Ensemble, you may have just found your new favorite band.
Posted by JonfromWisconsin at 10:50 AM